People with diabetes are all too familiar with the warning from healthcare and wellness professionals about the need to stay clear of a lot of popular drinks out there. We are talking beverages ranging from sports drinks, sodas and a wide range of sugary juices.

Thankfully, there is still an abundance of flavored drinks you can add to your healthy diet without being afraid of a spike in blood sugar.

At the top of the pile is the ginger tea. Ginger is well known for its spicy flavor and strong aroma. Native to the warmer climes within Asia, this staple spice found in many tea, herbal medicine and cuisine has over centuries been the ultimate remedy in many cultures to help soothe an upset stomach, treat nausea and morning sickness as well as rheumatoid arthritis.

Even more within the last decades, it has been shown by several researchers that consuming ginger can help reduce blood sugar levels and even lower blood pressure in diabetes treatment.

Eating raw ginger or sipping any ginger extracts comes with various health benefits but for a diabetic, are there dangers lurking behind this herb that one should consider before sipping its apparent spicy richness?

In this article, we will be exploring the most important details relating to Ginger tea and diabetes.

A member of the Zingiberaceae family, the Ginger plant with its yellowish-green flower and green stem has featured on many tables as a spice or healing aid.

Native to only a few countries within Southeast Asia including India and China but has now stretched its healing roots to other continents as growers from South America, Africa and the Middle East have joined others in harnessing the rich natural chemicals found within this tropical plant.

The ginger plant comes in many varieties. Ginger rhizome, which is the root of the ginger plant, can reveal colors of red, yellow and even white when you slice it open.

One outstanding feature of ginger is the plethora of ways it can be used. As far as eating goes, you can eat it fresh, dried or make ginger tea out of it.

It's also a common flavoring agent in many foods and beverages. Manufacturers add ginger extract as a fragrance in soap and beauty products. Even some of its properties are extracted as ingredients in laxatives, anti-gas and antacid drugs.

For diabetics, ginger has been known to manage diabetes by stimulating the production of insulin and aiding fasting blood sugar control. Backed by a few research evidence, we will also see how ginger tea helps to improve glycemic control, lower blood pressure, and even weight loss.

Here's everything you need to know about the benefits of ginger tea and to be honest… It's quite a lot.

Discover what Klinio app can do for you 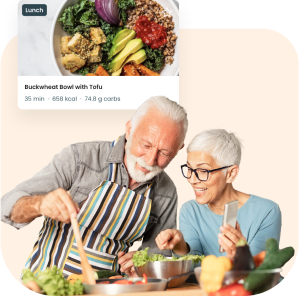 Personalized workouts with no equipment needed 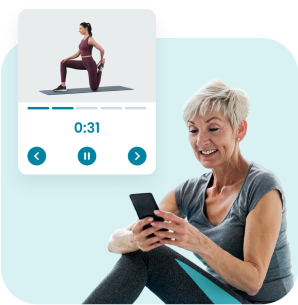 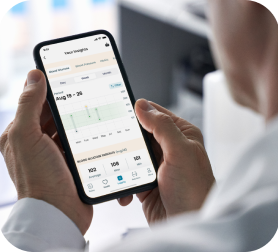 Whether you call it ginger water or ginger tea, the many health benefits of this pungent aromatic root cannot be overstated.

The addition of ginger tea to one's diet plan has been shown to regulate fasting blood sugar levels and this is because of the compound gingerols which is an active ingredient in ginger. It is just about perfect for improving insulin sensitivity and preventing an increase in blood glucose levels. As an enabler for increased insulin levels, ginger can aid glycemic control and put a stop to constant hyperglycemia (high blood sugar)

A study published in 2015 in the Journal of Complementary and Integrative Medicine revealed that people with type 2 diabetes that were given ginger powder showed better glycemic control and lower total cholesterol. This was contrary to the other Iranian adults who were among the placebo group that was given 1600 milligrams (mg) of ginger powder for 12 weeks.

Although the research can be described as short, lasting about three months. Still, it further helped to gain insight into the effect of ginger rhizome on blood sugar control.

“Low GI foods break down slowly to form glucose and therefore do not trigger a spike in blood sugar levels as high GI foods do.”

Remedy for Nausea and related illnesses

Drinking ginger tea has been attributed to easing nausea due to its ability to trigger the production of stomach acid which decreases when one experiences nausea. It's also a go-to plant to help dispel morning sickness, upset stomach and motion sickness.

This was seen in a study in 2005 that showed two sets of pregnant women that were given  4 grams of ginger powder or a placebo for four days. There was a significant increase shown by those that received ginger as they experienced less morning sickness and a relief of their nausea.

Helps with Cold and Flu

This is almost a cliche as it has been used for centuries to heat up the body from cold and flu. Ginger tea is great for the winter as a hot cup can help to revive your body with the much-needed warmth.

A panacea for reduction of cholesterol levels.

Among its many health benefits, ginger tea is said to also reduce heart disease markers including arginase activity and triglycerides as research work has shown this in rats fed with a high-fat diet.

Consuming ginger tea can help you make progress in your weight loss plans. Unlike some popular beverages, ginger tea can effectively reduce weight owing to its thermogenic effect that boosts fat burning.

This is backed up by a study that tested diabetic rats with both cinnamon and ginger and the result revealed a significant reduction of body weight and blood glucose levels in the group of high-fat diet obese diabetic rats that took the ginger extract.

Also, a study researching Men who drank ginger tea after eating showed they burned more calories and felt more full than those within the placebo group that were given water.

Cataract is one of the long-term visual challenges for people with diabetes but slurping a few shots of ginger tea daily is believed to delay the onset of cataracts.

We all get that rumble in our belle accompanied by an uncontrollable release of farts. It can be painful and surely embarrassing when in public but the intake of ginger tea with its rich amount of antioxidants has been hailed as a solution to issues like this including cases of bloating. Gingerols is best known to reduce the amount of gas produced by the intestine which is why those with upset stomach constantly use it.

Healing properties for Pains and Inflammation

Ginger's anti inflammatory properties is one major active component that has made it a plant for all.

Muscle pain, joint pain and inflammation; are recurring issues our body battles with constantly. Drinking ginger tea has long been known to relieve inflammation and allergic reaction because of the anti-inflammatory substance, gingerols. It's also effective in relieving joint pains like arthritis, menstrual cramps as well as muscle pains. A study of men that took ginger supplements felt less muscle pain after workout sessions.

Although still early days in terms of scientific findings, a few studies have hailed the cancer-fighting potency of ginger to prevent gastrointestinal and prostate cancer. These studies show that taking ginger can help protect cells from being cancerous owing to its high antioxidant properties.

Health risk of ginger tea in your diabetes diet

While ginger and its many extracts have been promoted over centuries as the one true wonder herb that cures just about anything, there remain a few issues with the ginger plant that is known to reduce blood glucose levels in diabetic patient.

Diabetic folks in particular have heard it all when it comes to herbs and are rightfully careful with anything that they add to their diet irrespective of the number of persons that swear by it.

Let's now see the potential risk that comes with adding ginger tea to your diabetes diet.

Moderation is key here as anything above 3-4 grams of ginger extract per day is considered overconsumption. This should be taken over a long period rather than the short alternative.

Ginger tea can interact with other medications

The advice to always contact your health professional is something every diabetic must take seriously, especially when in doubt about anything that goes into your belle.

As found out, a lot of medications interact with the gingerols, the active compound in ginger and this includes blood-thinning medications so it's best you talk to your health care provider before you take ginger or even any ginger supplementation.

Bear in mind that ginger tea or ginger supplements are not substitute for your type 2 diabetes treatment. Don't fail to call your doctor if you experience any kind of symptoms.

At Klinio, we know how it feels to battle type 2 diabetes and would love to help in any way we can.

It can lower blood sugar

If you are managing type 2 diabetes, you know the constant battle is how to maintain control of your blood glucose level. Ginger or any ginger supplementation has the potential to lower blood sugar levels to a dangerous point. So as mentioned before, ring your Doctor before you add this spice to your meal or your drink.

Ginger is by far a better additive than the likes of salt which increases your risk of high blood pressure but it also has salicylate as part of its properties. This is the same chemical you find in aspirin which by function acts as a blood thinner. Consequently, this can pose a serious challenge for those with bleeding disorders.

Ginger tea can cause heartburn

Heartburn can be experienced when you take ginger tea and evidence has it that it can aggravate gastroesophageal reflux disease (GERD). Again, Moderation is key here.

Ginger tea has been noted a lot of times for helping to lower blood pressure with the feeling of lightheadedness as an effect.

How to make ginger tea

Clear the fridge of those unhealthy sports and beverage drinks and get ready to make ginger tea. It's important you try to make this simple drink all by yourself as many of these so-called ginger products out there have been spiked with artificial ginger flavors.

But before we go into how to make ginger tea, let's see what type of vitamins and minerals you are getting from this root.

The vitamins and minerals joined to the root of the ginger plant include:

From the lineup, you can clearly see that it's packed with a league of great vitamins and minerals. Now let's get to how to make the ginger tea or as many call it, ginger water.

To make ginger tea, slice your fresh ginger into thin bits after you must have rinsed and scrub any visible dirt.

A one-inch piece of ginger per cup of tea is just about right. Now add your cut ginger into freshwater contained in say a saucepan. Let the mixture boil over intense heat. Reduce heat and gently allow to simmer for five to ten minutes depending on how pungent you want the taste.

Use a sieve to filter the water from the sliced ginger and get ready to have a taste of the soothing power of the ginger root.

You can go creative by adding a teaspoon of honey or lemon to zest up the taste.

Taking ginger tea or ginger water is almost perfect for all health conditions. We have seen the endless benefits but remain wary of possible risks.

In all, to avoid any diabetic discomfort, always do the absolute needful of consulting your doctor before drinking ginger tea.

Get more by downloading our free Klinio App. Analyze your health, form new habits and manage your diabetes anytime, anywhere. 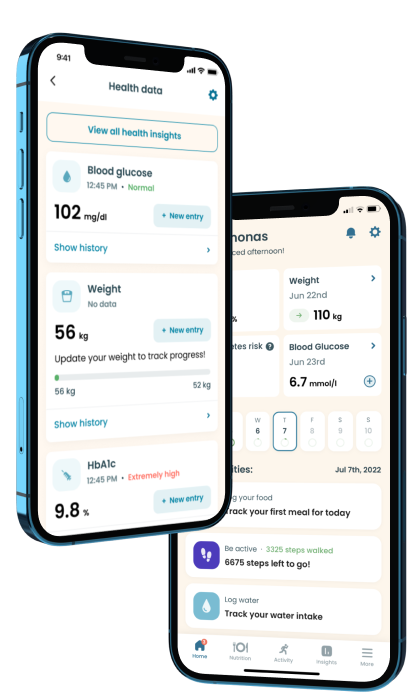 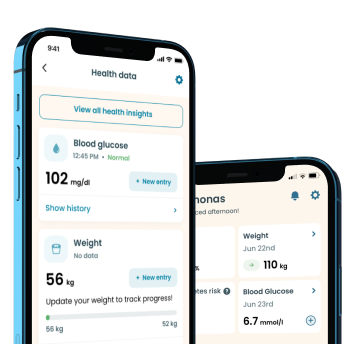 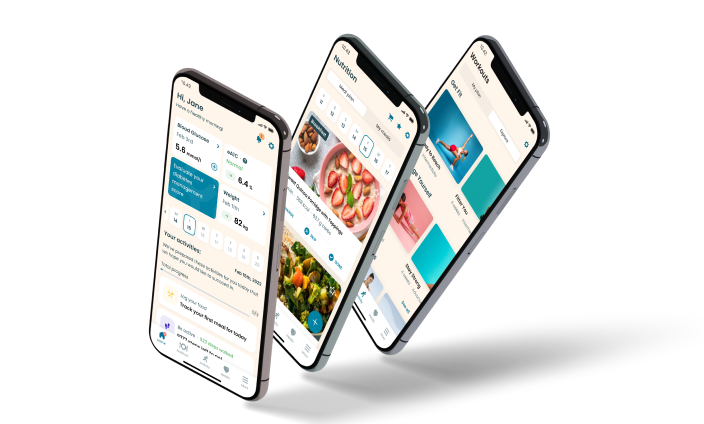 Orange Juice and Diabetes: Good Enough for My Condition?

Beer and Diabetes: Can I Still Drink Beer?

Wine and Diabetes: Can I Still Drink Alcohol?